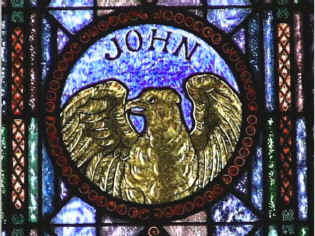 Information on Gospel of John

Robert Kysar writes the following on the authorship of the Gospel of John (The Anchor Bible Dictionary, v. 3, pp. 919-920):

The supposition that the author was one and the same with the beloved disciple is often advanced as a means of insuring that the evangelist did witness Jesus' ministry. Two other passages are advanced as evidence of the same - 19:35 and 21:24. But both falter under close scrutiny. 19:35 does not claim that the author was the one who witnessed the scene but only that the scene is related on the sound basis of eyewitness. 21:24 is part of the appendix of the gospel and should not be assumed to have come from the same hand as that responsible for the body of the gospel. Neither of these passages, therefore, persuades many Johannine scholars that the author claims eyewitness status.

There is a case to be made that John, the son of Zebedee, had already died long before the Gospel of John came to be written. It is worth noting for its own sake, even though the "beloved disciple" need not be identified with John, the son of Zebedee. In his ninth century Chronicle in the codex Coislinianus, George Hartolos says, "[John] was worth of martyrdom." Hamartolos proceeds to quote Papias to the effect that, "he [John] was killed by the Jews." In the de Boor fragment of an epitome of the fifth century Chronicle of Philip of Side, the author quotes Papias: Papias in the second book says that John the divine and James his brother were killed by Jews. Morton Enslin observes (Christian Beginnings, pp. 369-370): "That PapiasÂ source of information is simply an inference from Mark 10:35-40 or its parallel, Matt. 20:20-23, is possible. None the less, this Marcan passage itself affords solid ground. No reasonable interpretation of these words can deny the high probability that by the time these words were written [ca. 70 CE] both brothers had 'drunk the cup' that Jesus had drunk and had been 'baptized with the baptism' with which he had been baptized." Since the patristic tradition is unanimous in identifying the beloved disciple with John, at least this evidence discredits the patristic tradition concerning the authorship of the Gospel of John.

If the author of the Gospel of John were an eyewitness, presumably the author would have known that Jesus and his compatriots were permitted to enter the synagogues. But at one several points it is stated that those who acknowledged Jesus as the Christ during the life of Jesus were put out of the synagogue. This anachronism is inconceivable as the product of an eyewitness.

Kysar states concerning the dating of the Gospel of John: "Those who relate the expulsion to a formal effort on the part of Judaism to purge itself of Christian believers link the composition of the gospel with a date soon after the Council of Jamnia, which is supposed to have promulgated such an action. Hence, these scholars would date John after 90. Those inclined to see the expulsion more in terms of an informal action on the part of a local synagogue are free to propose an earlier date." (p. 919)

Kysar also observes on the dating of the Gospel of John: "The earliest date for the gospel hinges upon the question of whether or not it presupposes the destruction of the Temple in 70 C.E. Most agree that it does, although there have been persistent attempts to argue otherwise. The reasons for positing a post-70 date include the view of the Temple implicit in 2:13-22. Most would argue that the passage attempts to present Christ as the replacement of the Temple that has been destroyed." (p. 918) Note also the irony of 11:48: "If we let him go on like this, everyone will believe in him, and then the Romans will come and take away both our place [i.e. temple] and our nation." Finally, there is no mention of the Sadducees, which reflects post-70 Judaism. The retort that there is also no mention of scribes misses the mark, as the Pharisees represented the scribal tradition, and the Pharisees are mentioned.

The terminus a quo might also be set by dependence upon the Gospel of Mark, if it were certain that the Gospel of John is dependent upon Mark. The matter is debated in contemporary scholarship, but Kysar says that the theory of Johannine independence commands a "slim majority" of contemporary critics. For a discussion of this issue, D. Moody Smith's John Among the Gospels is recommended.

The external evidence fixes the terminus ad quem for the Gospel of John. Irenaeus of Lyons made use of John (c. 180), and Tatian included the Gospel of John in his harmony (c. 170). The Gospel of John is also mentioned in the Muratorian Canon (c. 170-200). Justin Martyr (c. 150-160) and the Epistula Apostolorum (c. 140-150) may have made use of the Gospel of John. But the earliest known usage of John is among Gnostic circles. These include the Naassene Fragment quoted by Hippolytus Ref. 5.7.2-9 (c. 120-140), the Valentinian texts cited in Clement of Alexandria's Excerpta ex Theodotou (c. 140-160), a Valentinian Exposition to the Prologue of the Gospel of John quoted in Irenaeus' Adv. Haer. 1.8.5-6 (c. 140-160), and the commentary of Heracleon on John (c. 150-180, quoted in Origen's own commentary). The oldest fragment of the New Testament, known as p52 or the John Rylands fragment, attests to canonical John and is dated paleographically c. 120-130 CE.

Kysar writes: "In the place where the synoptics narrate the origin of the eucharist stands the account of the foot washing (13:1-10). The last meal Jesus celebrates with his disciples before his passion is not a Passover meal at all. Thus one of the basic features of the institution scenes in the synoptics is missing. Furthermore, there is no account of the baptism of Jesus, and there is confusion about whether or not Jesus practiced baptism (compare 3:22 and 4:2). Water baptism is treated critically and assigned strictly to the Baptizer in contrast with Spirit baptism (1:26, 31, 33). One is left with the impression that the sacraments of baptism and eucharist did not figure in the theology of the fourth evangelist." (p. 929)

Kysar states: "The passages which seem to address the sacraments are sometimes thought to be redactional. Some maintain that 'water and' in 3:5 and the discourse in 6:51-59 are insertions of a later hand by one interested in strengthening the explicit sacramental teachings of the gospel. It has been recently argued that portions of chaps. 13-17 come froma redactor at the time of the writing of the Johannine epistles some ten years or more after the completion of the gospel." (p. 922)

Norman Perrin believes that the redactor who added the sacramental passages to the Gospel of John also authored the first epistle of John, in which the sacraments are emphasized.

Helms adduces evidence that there were divisions over the interpretation of John at an early period, as early as the writing of the epistles 1 John and 2 John. Consider the passages 1 John 2:18-19 and 2 John 7. Helms writes (Who Wrote the Gospels?, p. 163):

Some members of the Johannine community departed, became a rival sect, over the question of the 'flesh' of Jesus Christ, an event that leads the author of I John to the certainty that 'this is the last hour.' We do not know for sure who these secessionists were, but as Raymond Brown notes, they were 'not detectably outsiders to the Johannine community but the offspring of Johannine thought itself, justifying their position by the Johannine Gospel and its implications' (1979, 107). This seems likely, until we reflect on the oddity of people who purportedly deny that 'Jesus Christ came in the flesh' citing a gospel that declares 'the Word became flesh,' and 'whoever eats my flesh and drinks my blood possesses eternal life.' Brown's argument founders on his insistence that 'John exactly as we have it' (108, his italics) was the text used by those who left the Johannine community. Brown refuses to 'exclude certain passages from the Fourth Gospel on the grounds that they were probably not in the tradition known to the secessionists but were added by the redactor (either later or as anti-secessionist revision)' (1979, 109). He admits that many accept that John 1:14 - 'The Word became flesh' - was 'added by the redactor as an attack on the opponents of I John' (1979, 109) but continues to write as if there were no revision of the Fourth Gospel.

Helms states, "we need to note that part of the purpose of Irenaeus was to attack the teachings of Cerinthus, a gnostic Christian teacher who lived in Ephesus at the end of the first century" (op. cit., p. 162). Cerinthus was "educated in the wisdom of the Egyptians, taught that the world was not made by a primary God, but by a certain Power far separated from him...Moreover, after [Jesus'] baptism, Christ descended upon him in the form of a dove from the Supreme Ruler, and that then he proclaimed the unknown Father, and performed miracles. But at last Christ departed from Jesus, and that then Jesus suffered and rose again, while Christ remained impassible, inasmuch as he was a spiritual being" (1.26.1). Irenaeus stated that the purpose of John at Ephesus was as follows:

by the proclamation of the Gospel, to remove that error which by Cerinthus had been disseminated among men, and a long time previously by those termed Nicolaitans, who are an offset of that 'knowledge' [gnosis] falsely so called, that he might confound them, and persuade them that there is but one God, who made all things by His Word; and not, as they allege, that the Creator was one, but the Father and the Lord another; and that the Son of the Creator was, forsooth, one, but the Christ from above another (3.11.1)

Helms argues: "So the gospel attributed, late in the second century, to John at Ephesus was viewed as an anti-gnostic, anti-Cerinthean work. But, very strangely, Epiphanius, in his book against the heretics, argues against those who actually believed that it was Cerinthus himself who wrote the Gospel of John! (Adv. Haer. 51.3.6). How could it be that the Fourth Gospel was at one time in its history regarded as the product of an Egyptian-trained gnostic, and at another time in its history regarded as composed for the very purpose of attacking this same gnostic? I think the answer is plausible that in an early, now-lost version, the Fourth Gospel could well have been read in a Cerinthean, gnostic fashion, but that at Ephesus a revision of it was produced (we now call it the Gospel of John) that put this gospel back into the Christian mainstream."