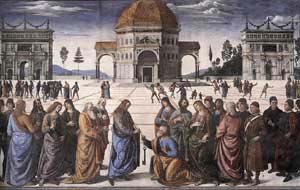 Information on Apocalypse of Peter (Akhmim)

Period of origin and circulation: we do not know the original text of the Apocalypse of Peter. The translation below makes it clear that the Greek and Ethiopic texts frequently diverge from one another. The Ethiopic version contains a series of linguistic obscurities which are evidently to be traced back to lacunae and defects in the transmission of the text. In this respect it deserves attention that Clement of Alexandria regards the Apocalypse of Peter as Holy Scriptures (cf. Euseb. HE VI 14.1), which is proof of an origin at least in the first half of the 2nd century. The terminus a quo can be more precisely determined through the time of origin of 4 Est. (about 100 A.D.), which was probably used in the Apocalypse of Peter (cf. 4 Est. with c. 3), and 2 Peter, the priority of which was demonstrated by F. Spitta. We thus come, with H. Weinel, to approximately the year 135 as the probable time of origin, if in interpreting the parable of the fig-tree in c. 2 we also relate the Jewish Antichrist who persecutes the Christians to Bar Cochba.

The Apocalypse presumably came into being in Egypt (cf. Clement of Alexandria); the reference to the Egyptian worship of animals also points in this direction, in so far as this passage belongs to the original content. In this connection however we must refer above al to the ancient Egyptian Peter tradition (cf. esp. Berger, 275). Starting from a first rendering into Coptic, the Ethiopic translation probably came into being - as usual - though the medium of Arabic versions. To this extent our Ethiopic text, linguistically not altogether unexceptionable, is only the last in a series, with all the imponderables that entails.

Müller writes (New Testament Apocrphya, vol. 2, p. 625): "The significance of the Apocalypse of Peter as an important witness of the Petrine literature is not to be underestimated. Peter is the decisive witness of the resurrection event. Hence he is also deemed worthy of further revelations, which he hands on (in revelation documents) with authority. Revelatio and traditio, receiving and handing on, the chain of transmitters, are the central ideas of this understanding of revelation (Berger). Peter's disciple Clement (2 Clem. 5) plays the decisive role here, as witnessed by the Ethiopic version of the Apocalypse, which belongs in the framework of the Clement literature in which Peter hands on the secret revelation to Clement (on Peter as a recipient of revelation cf. Berger, 379ff.). As compared with the Canon, the eschatological functions of Peter are new (Berger, 325). In its description of heaven and hell the Apocalypse draws on the abundance of ideas from the East which has also left its deposit in the writings of late Jewish Apocalyptic and the mystery religions. The motif of the river of fire, which is one of the pregnant eschatological ideas among the Egyptian Christians, certainly goes back to ancient Egypt. In view of the abundance of traditions in Egypt and the prestige of the Petrine tradition there (veneration of Peter's disciple Mark), an origin in Egypt is probable. The Apocalypse of Peter brings together divergent traditions, for which it has not yet been possible to discover any uniform source."