Home > Apocrypha > Gospel of the Egyptians

Gospel of the Egyptians 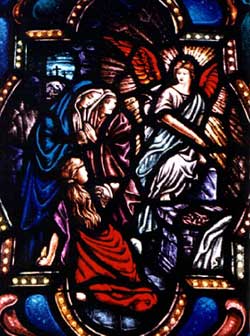 Information on the Gospel of the Egyptians

In this gospel, it seems that Salome, mentioned only by Mark in the New Testament, played a prominent place. The image above is of the women including Salome at the tomb (Mark 16).

The Gospel of the Egyptians is no longer extant but was mentioned by Hippolytus and Epiphanius. Most of our citations come from Clement of Alexandria, and there is also a reference in the Excerpts of Theodotus. The gospel was apparently used in Egypt in the second and third centuries.

Ron Cameron provides these comments in his introduction in The Other Gospels:

Despite the paucity of the extant fragments, the theology of the Gospel of the Egyptians is clear: each fragment endorses sexual asceticism as the means of breaking the lethal cycle of birth and of overcoming the alleged sinful differences between male and female, enabling all persons to return to what was understood to be their primordial and androgynous state. This theology is reflected in speculative interpretations of the Genesis accounts of the Creation and the Fall (Gen. 1:27; 2:16-17, 24; 3:21), according to which the unity of the first man was disrupted by the creation of woman and sexual division. Salvation was thus thought to be the recapitulation of Adam and Eve's primordial state, the removal of the body and the reunion of the sexes. This return to the primordial state was said to be accomplished - or at least symbolized - by baptism. In this respect, the Gospel of the Egyptians is to be compared with Paul's letter to the Galatians (Gal. 3:26-28) and the Corinthians (I Cor. 12:13), which presuppose this baptismal theology but use the tradition differently, interpreting the theme of unity as a social category to refer to the unity of Jews and Greeks, slaves and freedmen, males and females.

Cameron goes on to note that the the "compositional technique" of expanding sayings into short dialogues is similar to that found in the Gospel of Thomas and in the Dialogue of The Savior "both in terms of form and structure and in terms of subject matter and content." Cameron states concerning dating, "The earliest possible date for composition of this gospel would be in the middle of the first century, when sayings traditions such as those attested in I Corinthians were being circulated. The latest possible date would be in the middle of the second century, when certain gnostic groups appropriated this gospel, making use of these sayings which shortly thereafter were quoted by Clement. Based on compositional parallels in the morphology of the tradition, a date in the late first or early second century is most likely."