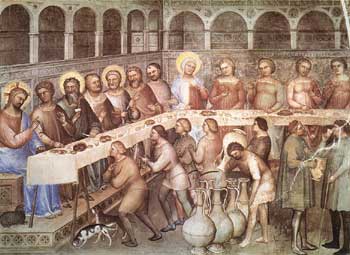 Information on the Signs Gospel

D. Moody Smith comments (Johannine Christianity, p. 63): "It is now rather widely agreed that the Fourth Evangelist drew upon a miracle tradition or written source(s) substantially independent of the synoptics, whether or not he had any knowledge of one or more of those gospels. Since the epoch-making commentary of Rudolf Bultmann, the hypothesis of a semeia- (or miracle) source has gained rather wide acceptance."

D. Moody Smith writes (Johannine Christianity, p. 63): "Whether such a miracle source can be precisely isolated and identified, as Bultmann and some who follow him think, is a question we need not decide here. The demonstration of the existence of a source (or sources) is not entirely dependent upon the possibility of isolating it with certainty and precision throughout the Gospel."

But there is one source whose use must be recognized: a signs source.

In 2:11 Jesus' miracle at Cana is described as "the first of his signs." Further signs are mentioned in general terms in 2:23, and in 4:54 the healing of the official's son at Capernaum is described as "the second sign that Jesus did when he had come from Judea to Galilee." Then 12:37 says, "Though he had done so many signs before them, yet they did not believe in him," and this note is sounded again in the closing summary of the gospel proper, 20:30-31: "Now Jesus did many other signs in the presence of the disciples, which are not written in this book; but these are written that you may believe. . . ." The possibility that in his narrative up to 12:37 the evangelist had used a source other than the synoptic gospels or the tradition represented by those gospels is strengthened since all the other miracles in John that are not paralleled in the synoptic gospels occur before 12:37: the healing at the pool of Bethzatha (5:1-9); the healing of the blind man (9:1-12); the raising of Lazarus (11:1-44). These miracles are generally on a grander and more elaborate scale than those in the synoptic gospels and seem to go further in presenting Jesus as a Hellenistic "divine man." Throughout the gospel until 12:37-38, and again in 20:30-31, the miracles are presented as intending to call forth faith: 2:11; 4:53; 6:14; 7:31; 11:45, 47b-48; 12:37-38; 20:31. Whereas in the synoptic gospels the emphasis is on faith as the prerequisite for miracles (e.g., Mark 6:5-6), here in the gospel of John miracles induce faith. These references not only contrast with the synoptic gospels, they also contrast with the remainder of the gospel of John itself. In 2:23-25 as in 4:48, Jesus repudiates the kind of faith induced by signs. The conversation with Nicodemus contrasts such faith unfavorably with rebirth "from above" and "of the spirit" (3:2, 3, 5-6). These factors make it very probable that the author of the gospel of John is using as a source and reinterpreting a book of signs that presents Jesus as a Hellenistic "divine man" whose miracles induce faith.

The most widely held proposal for a literary source is that of a signs source. A number of things in the gospel contribute to the effort to reconstruct such a source: The presence of the series of wonder stories in the narrative, the unique use of the word, semeia ("signs"), to designate such wonders, the numbering of the signs in 2:11 and 4:54, and the reference to signs in the conclusion of the gospel. It is further proposed that the delicate and complicated attitude toward the role of signs in nurturing faih found throughout the gospel is explained by the fact that the evangelist was using a collection of wonder stories which purported a view of signs about which there was some reservation on the part of the author of the gospel. What is proposed is that there was a collection of the wonders of Jesus circulating within the Johannine community prior to the writing of the gospel. Efforts to reconstruct such a signs source from the gospel vary. At one extreme is the argument that it contained not only the wonders narrated in the gospel, but also the calling of the disciples in 1:19-51 and a passion story. At the other extreme is the suggestion that the collection was little more than seven wonder stories told consecutively. Some such theory is embraced by a large number of Johannine scholars, but by no means has agreement been reached on such a proposal.

As SQ's title indicates, it was first of all the word "sign" that suggested the survival of an older layer in the text of the present gospel. On the one hand, this term - and particularly its connection with faith - is used only rarely and negatively in the Synoptics and there never of the miracles Jesus had performed; and on the other hand, in the Fourth Gospel also "signs-faith" sometimes comes in criticism (e.g., 4:48; 6:26) but at other points - presumably pre-Johannine - is to be understood in an entirely positive sense.

Further, in the first part of the gospel there are what seem to be vestiges of a pattern of numbering the signs (2:11, 4:54). In fact, it is these miracle stories and others now unnumbered, together with Jesus' dialogues and long monologues ("discourses") now growing out of them, that alone comprise his public activity. What in the other gospels, and in far more diverse form, has been called his "ministry" can only be described in this gospel as his self-presentation in the performing of signs and in extended talk about them.

Thus, to many scholars there has seemed to lie behind the present text a protogospel that presented only Jesus' signs, and a series of them, and did so wholly affirmatively. They were significations (that is, demonstrations) of his messianic status, on the basis of which his first disciples and then many others believed in him; those who "came and saw" (1:39) immediately recognized him as the one so long hoped for in Jewish expectation.

There is considerable debate over whether the Signs Gospel may have contained a passion narrative or instead contained only a collection of seven miracle stories. In the reconstruction offered by Fortna, a passion story is included.

On the dating of the Signs Gospel, there is little to go on. The reference to the Pool of Bethesda as still standing in 5:2, even though it was destroyed by the Romans in 70 CE, suggests a dating before the year 70 CE or not too long afterwards. The latest possible date is set by its incorporation into the Gospel of John.