Home > Other Christian Text Sources > The Testaments of the Twelve Patriarchs

The Testaments of the Twelve Patriarchs 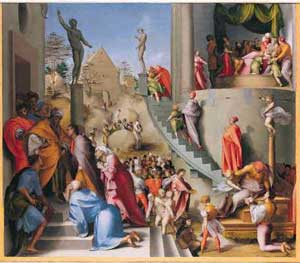 Information on the Testaments of the Twelve Patriarchs

References in Origen (Hom. in Joshua. 15.6) and Jerome (Tractatus de Psalmo 15) show that the Testament of the Twelve Patriarchs existed in some form in the second century CE.

There are several passages with Christian content, but these are assumed to come from Christian redaction of an originally Jewish document. Marinus de Jonge comments on the attempts to determine the development of the document (The Anchor Bible Dictionary, v. 5, p. 183):

At the beginning of the 20th century, R. H. Charles distinguished between a 2d-century B.C. pro-Hasmonean original to which extensive anti-Hasmonean passages (advocating a Messiah from Judah) were added in the 1st century B.C. In 1970 J. Becker assumed a Hellenistic-Jewish "Grundschrift," stemming from Wisdom circles dated around 200-175 B.C. This formed the nucleus of the present writing that took shape in the subsequent centuries by the addition of Hellenistic-Jewish homilies, apocalyptic visions, midrashic expositions, etc. In 1977 A. Hultgard, in an analysis of the apocalyptic passages, found first an anti-Hasmonean stage with the expectation of an ideal Levi and an ideal Judah; later, in the beginning of the 1st century B.C., the emphasis was on intervention by God himself, on the expectation of a Davidic messiah and on the hope of the resurrection and last judgment. In the 1st century A.D. there was a new redaction, introducing a central eschatological figure called the 'priest-savior,' the result of the merger of different traditions.

A different approach has also been advocated (de Jonge 1953). There is no doubt that T. 12 P. are Christian in their present form and must have received that form sometime in the second half of the 2d century A.D. One first has to establish the meaning of the present T. 12 P. (allowing, of course, for possible alterations in the period between their origin and the origin of the archetype of our manuscript tradition) for a Christian audience around A.D. 200. Because the Christian passages cannot be removed without damaging the fabric of large sections of the work, we must assume at least a thoroughgoing Christian redaction. It is very difficult, if not impossible, to establish the exact contents of this "original" (pre-Christian) Jewish document, let alone to detect different stages in the redaction of that document. It is, in fact, uncertain whether one should speak of a Christian redaction of an existing Jewish T. 12 P. or of a Christian composition.