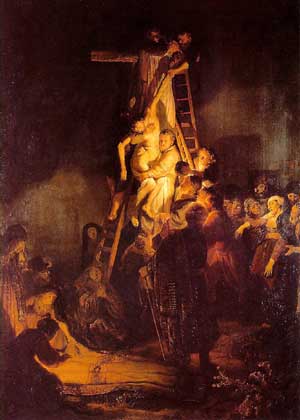 Information on the Gospel of Peter

The docetic note in this narrative appears in the statement that Jesus, while being crucified, 'remained silent, as though he felt no pain', and in the account of his death. It carefully avoids saying that he died, preferring to say that he 'was taken up', as though he - or at least his soul or spiritual self - was 'assumed' direct from the cross to the presence of God. (We shall see an echo of this idea in the Qur'an.) Then the cry of dereliction is reproduced in a form which suggests that, at that moment, his divine power left the bodily shell in which it had taken up temporary residence.

Apart from its docetic tendency, the most striking feature of the narrative is its complete exoneration of Pilate from alll responsibility for the crucifixion of Jesus. Pilate is here well on the way to the goal of canonisation which he was to attain in the Coptic Church. He withdraws from the trial after washing his hands, and Herod Antipas takes over from him, assuming the responsibility which, in Luke's passion narrative, he declined to accept. Roman soldiers play no part until they are sent by Pilate, at the request of the Jewish authorities, to provide the guard at the tomb of Jesus. The villians of the piece throughout are 'the Jews' - more particularly, the chief priests and the scribes. It is they who condemn Jesus to death and abuse him; it is they who crucify him and share out his clothes among themselves.

Ron Cameron argues that the Gospel of Peter is independent of the canonical four (The Other Gospels, pp. 77-8):

Identification of the sources of the Gospel of Peter is a matter of considerable debate. However, the language used to portray the passion provides a clue to the use of sources, the character of the tradition, and the date of composition. Analysis reveals that the passion narrative of the Gospel of Peter has been composed on the basis of references to the Jewish scriptures. The Gospel of Peter thus stands squarely in the tradition of exegetical interpretation of the Bible. Its sources of the passion narrative is oral tradition, understood in the light of scripture, interpreted within the wisdom movement. This accords with what we know of the confessions of the earliest believers in Jesus: in the beginning, belief in the suffering, death, burial, and resurrection of Jesus was simply the conviction that all this took place "according to the scriptures" (I Cor. 15:3-5). In utilizing scriptural references to compose the work, the Gospel of Peter shows no knowledge of the special material distinctive to each of the four gospels now in the New Testament. The developed apologetic technique typical of the Gospel of Matthew and of Justin (a church writer who lived in the middle of the second century), which seeks to demonstrate a correspondence between so-called prophetic "predictions" in the scriptures and their "fulfillments" in the fate of Jesus, is lacking. The use of quotation formulas to introduce scriptural citations is also absent.

All of this suggests that the Gospel of Peter is an independent witness of gospel traditions. Its earliest possible date of composition would be in the middle of the first century, when passion narratives first began to be compiled. The latest possible date would be in the second half of the second century, shortly before this gospel was used by the Christians at Rhossus and the copy discovered at Oxyrhynchus was made. It is well known that the passion narrative which Mark used originally circulated independently of his gopel; the Gospel of John demonstrates that different versions of this early passinon narrative ewre in circulation. It is possible that the Gospel of Peter used a source similar to that preserved independently in Mark and John. The basic stories underlying the accounts of the epiphany and the empty tomb are form critically discrete and probably very old. In fact, these stories are closely related to certain legendary accounts and apologetic fragments that intrude into the gospel of the New Testament (Matt. 27:51-54, 62-66; 28:2-4; Mark 9:2-8 and parallels). The Gospel of Peter's exoneration of Pilate, the Roman procurator who had Jesus killed, and the accompanying anti-Jewish polemica are secondary additions to these primitive narratives, imported from a situation in which the Jesus movement was beginning to define itself in opposition to other Jewish communities.

Form criticism and redaction criticism indicate that the Gospel of Peter was dependent upon a number of sources, but it is quite possible that the document as we have it antedates the four gospels of the New Testament and may have served as a source for their respective authors. The Gospel of Peter was probably composed in the second half of the first century, most likely in western Syria. As such, it is the oldest extant writing produced and circulated under the authority of the apostle Peter. The creation of a passion and resurrection narrative was the product of a communitiy of believers who understood the ultimate activity of God to have taken place in their own time, when the powers of unrighteousness and death were conquered by God's definitive act of raising the dead. Accordingly, the fate of Jesus is interpreted, in the hindsight of scripture, as God's vindication of the suffering righteous one.

J.D. Crossan is most famous for his reconstruction of a Cross Gospel preserved in the Gospel of Peter that served as the basis for the passion narrative in all four canonical gospels. Crossan has set forward this thesis briefly in Four Other Gospels as well as in his book The Cross that Spoke.

Koester has criticized this hypothesis for several reasons: the Gospel of Peter has been preserved mostly in one late manuscript, making certainty about the text difficult; Crossan seems to underestimate the role of oral tradition and assigns all the gospel materials to earlier noncanonical sources; finally, appearance stories cannot have been present in the passion narrative because they are independent of each other in the canonical gospels (Ancient Christian Gospels, pp. 219-20). Koester reaches slightly different conclusions about the passion narrative behind Peter (op. cit., p.240): "The Gospel of Peter, as a whole, is not dependent upon any of the canonical gospels. It is a composition which is analogous to the Gospels of Mark and John. All three writings, independently of each other, use an older passion narrative which is based upon an exegetical traidition that was still alive when these gospels were composed, and to which the Gospel of Matthew also had access. All five gospels under consideration, Mark, John, and Peter, as well as Matthew and Luke, concluded their gospels with narratives of the appearnces of Jesus on the basis of different epiphany stories that were told in different contexts. However, fragments of the epiphany story of Jesus being raised from the tomb, which the Gospel of Peter has preserved in its entirety, were employed in different literary contexts in the Gospels of Mark and Matthew."