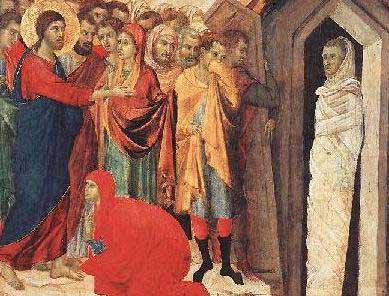 In 1958, Morton Smith found a letter of Clement of Alexandria at the Mar Saba monastary near the city of Jerusalem. The Secret Gospel of Mark is known only from the references in this letter.

Although there has been some controversy over the letter, today it is generally agreed that the letter is authentic correspondence written by Clement. In his introduction in The Complete Gospels, Stephen Patterson notes: "The handwriting can be dated to around 1750. Smith published the letter in 1973. Early discussion of it was marred by accusations of forgery and fraud, no doubt owing in part to its controversial comments. Today, however, there is almost unanimous agreement among Clementine scholars that the letter is authentic."

Stephen Patterson gives this account of the passages noted by Clement:

The first passage is a story of how Jesus miraculously raises a young man (neaniskos) who has recently died, at the behest of his bereaved sister. According to Clement, the story was added to Mark between verses 10:34 and 10:35. The story bears a striking resemblance to the raising of Lazarus in the Gospel of John (John 11:1-44). However, since it shows none of the typical marks of Johannine redaction which so strongly color the story about Lazarus, it is unlikely that the Secret Mark story is directly dependent upon its Johannine parallel. For its part, the version of the story from Secret Mark has its own peculiarities not found in John, such as the initiation of the young man into the "mystery of God's domain." The basic story, however, probably derives from the common stock of miracle stories available to both Mark and John, or their sources.

The second fragment is extremely brief, but nonetheless interesting. First, it mentions Salome, who appears in the New Testament elsewhere only in Mark (see 15:40; 16:1). Secondly, when placed in the slot where Clement indicates it occurs in Secret Mark (between 10:46a: "Then they came to Jericho," and 10:46b: "As he was leaving Jericho...") it fills a well-known hole in the Markan narrative. The stop in Jericho now seems, in light of the Secret Gospel, at least a little less futile.

There is debate over the relationship between Secret Mark and canonical Mark: was Clement correct to regard Secret Mark as an expansion of canonical Mark? F. F. Bruce writes, "The 'secret' character of the additional sayings is the most obvious Gnosticizing feature. . . . [Clement and contemporaries] were willing to treat acceptable expansions as belonging to a second edition produced by Mark after his alleged coming from Rome to Alexandria, but those expansions which were manifestly Gnostic were ascribed to the school of Carpocrates." (Jesus and Christian Origins Outside the New Testament, p. 165-166) Gerd Theissen and Annette Merz state (The Historical Jesus, p. 47): "the majority of exegetes regard the Secret Gospel as a Gnostic revision of the canonical Mark composed in the second century. This is supported by an emphasis on its 'secret' character and its use in Carpocratian circles, which evidently employed it to legitimate particular liturgical customs. Merkel explains the linguistic form of the pericope as a retelling of John 11 which borrows language from all four Gospels."

On the other hand, Helmut Koester and J.D. Crossan think that canonical Mark is derived from Secret Mark by elimination of these passages. Helmut Koester writes: "It is immediately evident that this story shows many similarities with the story of the raising of Lazarus in John 11. That it is, in fact, the same story is evident in the emphasis upon the love between Jesus and the man who was raised by him (cf. John 11:3, 5, 35-36), expressed twice in the additions of Secret Mark. Both stories are also located in Bethany. But it is impossible that Secret Mark is dependent upon John 11. In its version of the story, there are no traces of the rather extensive Johannine redaction (proper names, motif of the delay of Jesus' travel, measurement of space and time, discourses of Jesus with his disciples and with Martha and Mary). As to its form, Secret Mark represents a stage of development of the story that corresponds to the source used by John. The author evidently still had access to the free tradition of stories about Jesus, or perhaps to some older written collection of miracle stories." (Ancient Christian Gospels, p. 296) Another interesting point is that Salome is named without explanation in canonical Mark 15:40, 16:1. Clement of Alexandria quotes a reference from the Secret Gospel of Mark to "his mother and Salome," which may indicate the existence of stories including Salome in pre-canonical Mark.

Above we noted that Salome is mentioned in Secret Mark, and it is noteworthy that Salome is absent in the lists of women who went to the tomb in Matthew and Luke; it is possible that Matthew and Luke relied on a version of Mark without any mention of Salome. Thus, Secret Mark may be an important witness to the textual history of the Gospel of Mark.