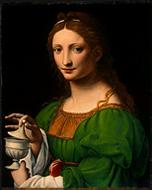 Information on the Gospel of Mary

In her introduction in The Complete Gospels, Karen King names the manuscripts available for the Gospel of Mary, "Only three fragmentary manuscripts are known to have survived into the modern period, two third-century fragments (P. Rylands 463 and P. Oxyrhynchus 3525) published in 1938 and 1983, and a longer fifth-century Coptic translation (Berolinensis Gnosticus 8052,1) published in 1955."

King goes on to make these text-critical observations:

There are, moreover, some important variations between the Greek and Coptic manuscripts. The translation which follows gives preference to the Greek fragments over the Coptic because they are earlier and are written in the original language of the text, and also because the Coptic variants reflect theological tendencies that arguably belong to a later time. For example, the Greek fragments seem to presume that the leadership of Mary Magdalene as a woman is not under debate; only her teaching is challenged. Changes in the Coptic version, however, point toward a situation in which women's leadership as such is being challenged and requires defense. The changes in the text may reflect the historical exclusion of women from their earlier leadership roles in Christian communities.

King states that the theology of the Gospel of Mary is as follows:

. . . the Gospel of Mary communicates a vision that the world is passing away, not toward a new creation or a new world order, but toward the dissolution of an illusory chaos of suffering, death, and illegitimate domination. The Savior has come so that each soul might discover its own true spiritual nature, its "root" in the Good, and return to the place of eternal rest beyond the constraints of time, matter, and false morality.

In her introduction in The Nag Hammadi Library, Karen King makes these observations:

The confrontation of Mary with Peter, a scenario also found in The Gospel of Thomas, Pistis Sophia, and The Gospel of the Egyptians, reflects some of the tensions in second-century Christianity. Peter and Andrew represent orthodox positions that deny the validity of esoteric revelation and reject the authority of women to teach. The Gospel of Mary attacks both of these positions head-on through its portrayal of Mary Magdalene. She is the Savior's beloved, possessed of knowledge and teaching superior to that of the public apostolic tradition. Her superiority is based on vision and private revelation and is demonstrated in her capacity to strengthen the wavering disciples and turn them toward the Good.

The terminus ad quem is set by the third century manuscripts that attest to the Gospel of Mary. The use of the term Savior for Jesus and the Gnostic theology in the Gospel of Mary suggest a dating in the second century.